Anna Fang is a friendly aviatrix and Anti-Tractionist spy who appears in all four books of the Mortal Engines Quartet.

Anna Fang was the child of air traders, her father was a Manchu air merchant, and her mother was a red-haired lady from the Ice Wastes. When their airship was captured, she became a slave in the northern ice city of Arkangel, under Stilton Kael until she managed to build the Jenny Haniver and escape. She then went to the raft city Perfume Harbour. She ended up working as a spy for the Anti-Traction League, destroying cities such as Marseilles that threaten static settlements. However, Anna Fang attempted to prevent civilian casualties in these instances. When sinking Marseilles, Fang placed explosives in a relatively empty area of the city's engine district, ensuring that the city would sink but also ensuring that none of the city's residents would be harmed by the explosives.

As Anna Fang is introduced in Mortal Engines, she saves Tom Natsworthy and Hester Shaw from the citizens of a traction town called Speedwell, who were going to sell them as slaves. They escape from Speedwell and fly off in the Jenny Haniver. In the airship, Anna asks Tom about London. They go to Airhaven, where they are attacked by Shrike. Anna and other Anti-Tractionists including Captain Khora delay the Stalker (although sustaining casualties), helping Tom and Hester escape. Anna Fang later bombs the pirate town Tunbridge Wheels and sinks it. She picks up Tom and Hester again and even though they now have learned that she is an Anti-Tractionist, they are still friends with her. During an attack on the air fleet, she is killed in Batmunkh Gompa by Thaddeus Valentine, who stabs her through the neck with his sword.

Between the events of Mortal Engines and Predator's Gold, Anti-Tractionists stole Fang's body from her tomb. The Green Storm, with the help of Dr. Popjoy, resurrect her body and create the Stalker Fang.

Anna's body is taken to Rogue's Roost, a secret base south of Greenland, and turned into a Stalker by the Green Storm. The Green Storm fill her room with pictures of people and places she knew in her past life with the hopes of making her remember who she was. However, the attempts are in vain as she doesn't remember anything. However, later on she does recognise Tom Natsworthy for a reason she cannot explain.

Meanwhile, Uncle plans to steal the Stalker Fang and make her steal things for him.He sends a group of Lost Boys to do so. When the Lost Boys arrive and attempt to take her, she kills them all and escapes her confines. She later takes control of the Green Storm's military forces and overthrows the leaders of the League in a military coup. The tractionists don't think much of this yet, as it doesn't matter to them what is happening with the Anti-Tractionists.

Shortly after taking command of the League's forces and integrating them with the Green Storm, the stalker Fang declared war on traction cities. As she is not truly alive herself, she places very little value on the lives of her troops, utilising suicide bombers and not particularly caring that the war has become constant.

Fang takes steps to recover an orbital superweapon called ODIN, a remnant of the Sixty Minute War. Before she can activate it, she is almost completely destroyed by Shrike, and her remains are scattered across the Sahara. They are discovered by Fishcake, a lonely Lost Boy, who agrees to help rebuild her. She remembers the activation codes for ODIN, and intends to continue her plan even if she has lost control of the Green Storm.

Fishcake rebuilds Fang's body, though he doesn't add the eyes back. As they travel east to activate ODIN the more peaceful side of her consciousness ("Anna") begins to re-emerge. They seek out Popjoy, who combines both personalities together. Eventually the Stalker does manage to fire ODIN on several targets, and intends to trigger volcano chains to wipe out humanity, as she believes that Earth can never return to its pre-Sixty Minute War state while humans remain in control of it. Tom Natsworthy finds her and pleads with her to stop, appealing to her humanity. The stalker then stops the countdown, but is then killed by Nimrod Pennyroyal, who still thought she was a threat.

Apart from Tom and Hester, Anna is the only character to appear in all four books, although the Stalker Fang is very different from the original Anna. 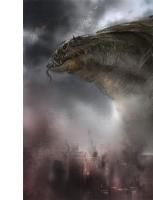