The Anti-Traction League is an organization opposed to the prevalence of the Nomad Empires and later Traction Cities and Municipal Darwinism. The League is the dominant power in Southern Asia though it also has territories in Africa and the Andes in Nuevo Maya (former South America). Its symbol is a bronze-colored broken wheel and its members are called "Anti-Tractionists".

The League controls most of Central Asia and at least some of Eastern Asia. Some lands include northern India, China and the Himalayas. These lands are protected from the Traction Cities of Europe by a massive mountain range, which includes the Himalayas. The only pass through these mountains is protected by the Shield Wall, a massive fortress of obsidian and the old deck plates of cities that dared try to pass it, several kilometres high, protected by missile batteries and a fleet of military airships (known as the Northern Fleet). Behind the Shield Wall the garrison city of Batmunkh Gompa resides. The two names are often used interchangeably.

The League is made up of many nations and kingdoms, whose people live in static towns and cities. The principal nation is Shan Guo, located in Western China and Central Asia. It was founded by Chinese refugees of the Sixty Minute War. Shan Guo also houses Tienjing, the League's capital. Tienjing is the location of the Jade Pagoda, where the ruling High Council has it's offices and living quarters.

The League was founded by a man named Lama Batmunkh in the aftermath of the Black Centuries which followed the Sixty Minute War. When the great nomad traction empires of Europ(e/a) started to become increasingly powerful, Batmunkh declared Shan Guo a 'demotorized zone'. Later, as of the Second Traction Boom (around 520 TE) more and more nations united against the new traction cities, causing the formation of an official Anti-Traction League. For most of the later half of the Traction Era, the League continually held the upper hand against the Traction cities, preventing their expansion into Asia.

In the year around the destruction of London, Thaddeus Valentine (an agent from London) destroys the League's Northern Air-Fleet in Batmunkh Gompa and kills Anna Fang, a hero of the League, in preparation for London's planned breach of the Shield Wall. However, London was then destroyed during when an attempt to use a superweapon called MEDUSA (a remnant of the Sixty Minute War) to destroy the Shield Wall backfired, as the weapon overloaded and destroyed London.

Although the Shield Wall remained intact, the Anti Tractionists suffered heavy losses over the following years for other reasons - including the destruction of the Spitzbergen Static, an enormous static metropolis in the Arctic Ice Wastes by Arkangel. As a result, a fanatical splinter group was formed: the Green Storm (although it could have unofficially existed long before as an underground movement in the League). It was spearheaded by young members of the League who were outraged at the failures of the League leadership which led to the death of Anna Fang and the destruction of the Northern Air-Fleet.

Unlike the League however, the Green Storm was prepared to use more radical means to end Municipal Darwinism and constructed Stalkers and combat airships so that it could wage open war on the Traction Cities. Two years after the Green Storm's formation, it overthrew the League's ruling body in a military coup, and began to implement its own militarist ideology. The cornerstone of its policy was waging a massive war against Traction Cities across the globe.

However, the war effort led to the neglect of the citizens in favor of better feeding the Green Storm's troops and funding military assets. At the end of the war, with the war over and the leadership of the Green Storm destroyed, the Asian nations return to the name "Anti-Traction League" and their old, peaceful ways. They made every Traction City static. 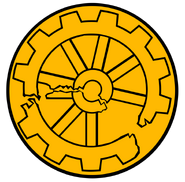 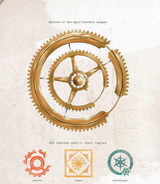 Various divisions of the Anti-Traction League, along with their respective symbols.