Batmunkh Gompa is an Anti-Tractionist city. It is protected by the Shield-Wall and the Northern Air-Fleet. It appeared in Mortal Engines and A Darkling Plain.

London is heading east towards Batmunkh Gompa, a city lying behind the shield-wall. The Shield-wall is a steel and stone wall defending the only possible entrance for traction cities into Shan Guo. London's plans are to arrive at the shield-wall and blast it down with MEDUSA and then enter Shan Guo and eat all of its cities.

After saving Airhaven from Tunbridge Wheels, Anna Fang takes Tom Natsworthy and Hester Shaw to Batmunkh Gompa. After hearing about what happened to Panzerstadt-Bayreuth, Tom tries to warn them of the danger of MEDUSA. However, Ermene Khan and Sathya are unfazed, as they could destroy London with their air fleet before it came in range. Great celebrations were happening throughout the city due to a festival. However, the celebrations were cut short when Thaddeus Valentine sabotaged the Northern-Air Fleet and killed several people, including Anna Fang. The city hoped that they would be able to blast London from the shield wall. Batmunkh Gompa is saved when MEDUSA overloads with energy and explodes.

By the time of A Darkling Plain, Batmunkh Gompa has been reduced from its former status as a vital fortress to a brief stop-off for forces on the way to the frontlines. Dr. Popjoy, former head of the Resurrection Corps of the Green Storm, lived here in his retirement mansion, "Dun Ressurectin'". The Stalker Fang visited Batmunkh Gompa for repairs, subsequently murdering Popjoy and stealing his Sky-yacht.

During the last hours of the Green Storm War, after ODIN was used to decimate the Traktionstadtsgesellschaft, a large Green Storm attack force was roused by General Naga in order to attack London, only for ODIN to be turned upon Zhan Shan, grounding many airships. Tom Natsworthy, Hester Shaw, and Shrike would subsequently commandeer the Jenny Haniver and flee Batmunkh Gompa, intending to track down the Stalker Fang and prevent further destruction.

After the War, it is implied that Batmunkh Gompa became the new seat of Anti-Tractionist power, with the capital of Tienjing destroyed by an ODIN strike. 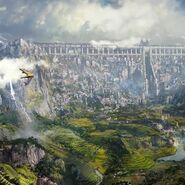