Bevis Pod was an Engineer apprentice in London. As with every other engineer, he has no hair and does not know his parents.

Bevis chased hester after her attempt to kill Valentine but was outrun by Tom. Bevis first meets Katherine in the Deep Gut Prison where he tries to save one of the prisoners there from death, but fails. Pod then contacts Katherine Valentine to tell her what he knew about the assassin that tried to murder her father. After that, he helps Katherine on her way to stop MEDUSA. He and Katherine fall in love, quite close to the end of the book (although Bevis might have had a thing for Katherine before this point). Bevis is killed when the 13th Floor Elevator falls on him.

Bevis' mother is revealed to be Lavinia Childermass in book four.

Bevis, in the film, is shown with hair. It is unknown why this was done in the film. Bevis first appears bumping into Katherine and Tom as they make their way to the Gut. He later explains to Katherine about the hints he has heard about MEDUSA, Thaddeus' weapon. At the end of the film, he survives the finale and is accepting into Shan Guo as refugees alongside the other Londoners. 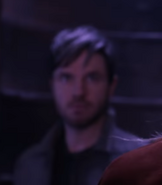