Mortal Engines; Predator's Gold; Infernal Devices; A Darkling Plain
The Jenny Haniver is the name of the main airship featured in the Mortal Engines Quartet. She is a small cargo airship with a crimson envelope.

Originally built by Anna Fang, the Jenny would fall out of her hands and be inherited by Tom Natsworthy and Hester Shaw up until its destruction. It was succeeded by Jenny Haniver II.

The Jenny Haniver was initially conceived and built as a racing airship being constructed by Stilton Kael on Arkangel named the Golden Arrow. However, he had been struggling to find suitable engines for his aircraft until Anna Fang found a pair of Junet-Carot engine cars in the salvage piles while she was a thrall in the Arkangel slave holds. She notified her overseer about these engines, which, in turn, lead Kael to discovering them. Curious as to why a thrall would know what they were, he tracked down Anna and interviewed her, revealing her knowledge on airships thanks to her early life with her air-trader parents. He enlisted her in his project to build and enter a ship in the Boreal Regatta.

Over time, Anna helped Stilton to gradually improve his original design for the Golden Arrow reducing the airships overall profile and original gondola which Anna had referred to as a small house upon seeing it for the first time. It is here that the airship gained its signature red colouring this being seen as an emblem of good luck for aviators and a token of respect for Arlo Thursday who was seen as a god of flight by the time of the late traction era.

Still named the Golden Arrow, Stilton had promised that Anna would be his copilot in the regatta and had proposed to her telling her that they would be married by the margrave of Anchorage when they won the race. This was until Stilton was told by his farther that the Masgard of Arkangel’s son would be joining him for the race instead. Seeing her way out of slavery blocked, Anna quickly set a plan to steal the Golden Arrow in progress. Anna told rival pilot and Stilton’s main competition Angel Glass about the features of the Arrow, referring namely to the modified and souped up Junet-Carot engines and told her the combination to the door lock.

This was enough to scare Angel Glass into trying to sabotage the Golden Arrow and Anna intentionally caught her about to smash the internals of the engines with an oversize spanner. Anna changed the combination on the door lock and was able to enlist a miffed Angel Glass to operate the door controls while Anna escaped on the Golden Arrow, but not before she confided that she’d be changing the name of the ship to the Jenny Haniver as it felt more appropriate given how the ship was cobbled together from pieces found scattered throughout Arkangel’s salvage yards.

With the Jenny now in her possession Anna would pilot it to the Spitzbergen Static in hopes of enlisting in the Anti-Traction League, instead she wound up helping a trader transport furs cementing her life in part as an air trader. The Jenny Haniver would then accompany Anna on her global travels. Taking her to the Hundred Isles, Nuevo Maya, Australia and a whole host of cities like London, Marseille and Dalkey.

By the time of 1007 TE, Anna was acting as an intelligence operative for the Anti-Traction League and used the Jenny Haniver to dock at the town of Stayns in a trading cluster. From there she used the airship to carry Tom Natsworthy and Hester Shaw as passengers to Airhaven. With the subsequent damage to Airhaven and downing on Black Island, Anna used the Jenny Haniver to attack and sink the amphibious suburb of Tunbridge Wheels which was attacking the island at the time. From there, Anna would take Tom and Hester as passengers again and transport them to the walled city of Batmunkh Gompa, London’s destination.

With Anna’s death at the sword of Thaddeus Valentine, Tom and Hester ‘Inherited’ the Jenny Haniver and intentionally used it to reach London in their own bid to shutdown MEDUSA or, at the least, allow Hester to get revenge on Valentine. When piloting the Jenny, Tom was forced to dogfight with Valentine’s airship The 13th Floor Elevator which resulted in a victory for the Jenny when Tom unloaded its rocket projectors into the the gondola of the 13th Floor. Horrified at his actions, Tom wouldn’t refill the projectors of the Jenny Haniver, claiming their ship would be peaceful.

After MEDUSA’s failure, Tom managed to pilot the airship far enough from the dying city to avoid being downed by the explosion. Following this, Tom and Hester headed to the air-caravansi on the Black Island seeking to get the airship repaired and then go on to travel, an idea suggested by Hester to help Tom cope with the death of his city.

Two years after the MEDUSA incident, Tom and Hester had made themselves a respectable living as air traders and had traveled much of the globe. In 1009TE, when they were docked in Airhaven, Tom and Hester were hired by the ‘alternative’ historian Nimrod Pennyroyal back to his home on the raft city of Brighton. This went seriously awry however, an extremist faction known as the Green Storm was tipped off to the Jenny Haniver’s whereabouts and aimed to capture it for their own means. Because of Tom's refusal on weaponry, the Jenny was seriously damaged in the ensuing chase and dogfight, forcing it to land in Anchorage for repairs. Hester then took off in a repaired Haniver and was captured by the Green Storm, only for Tom to rescue her and steal the ship back. The Jenny was yet again stolen though by a panicking Pennyroyal who shot Tom in the chest and escaped onboard the ship when he believed Anchorage was to be eaten by Arkangel.

Under Pennyroyal, the airship was repainted sky blue and renamed to the Arctic Roll as to avoid the Green Storm, who rose to power in the following years. The ship would spend most of its time in a glass roofed enclosure on the raft city of Brighton under its tenure of the Arctic Roll, forming the centrepiece to a museum about Pennyroyal’s exploits. The ship was discovered by Hester and later taken back by Tom when they were on Brighton looking for their kidnapped daughter Wren Natsworthy. Tom then used the Jenny Haniver under the name of the Arctic Roll to rescue his daughter, Theo Ngoni and attempt to rescue Hester from an untethered Cloud 9.

After the Battle of Brighton, Tom would resume his old life of an airtrader, this time with his daughter and specialising in old tech, the pair would use the Jenny Haniver to figure out the mystery of the Archaeopteryx, in doing so Tom, Wren and their passenger, Wolf Kobold, would fly to the ruins of London.

The final flight of the Jenny Haniver would happen in this time, when ODIN fired, Tom believed it to only be firing on the cities of the Traktionstadtsgesellschaft and that General Naga of the Green Storm had control over the weapon. He traveled to Batmunkh Gompa to try and convince Naga not to turn the weapon on New London. With this not being the case, Naga threw Tom in a cell believing him to be a TGS agent. At Batmunkh Gompa he would meet up again for the final time with Hester and Shrike, at Shrikes’ prompting they realise it must be the Stalker Fang controlling the weapon and the Jenny’s final flight is to Erzene Tezh, Anna Fangs old home believing that to be where the Stalker Fang had her uplink to ODIN. Their hypothesis was true but on their approach to the house stalker birds under Stalker Fang’s command mobbed the Jenny Haniver ripping apart the envelope, destroying the engine cars sending the ship down in a ball of fire as the gas cells ruptured.

The Jenny Haniver’s legacy would live on through Wren and Theo who would set themselves up as New London’s principal air-traders who named their own airship the Jenny Haniver II, after the original.

The Jenny had souped up engines, and rocket pods. It was considerably faster and more maneuverable than it looked, as is proved in Predator's Gold when it escapes from Green Storm airships by flying through a traction city. The rocket pods remain empty after Mortal Engines, as Tom Natsworthy morally refuses to use them. The rocket pods are filled up by Pennyroyal after he steals the Jenny at the end of Predator's Gold. These rockets allow Tom Natsworthy and Hester Shaw to escape Brighton near the end of Infernal Devices. 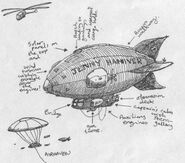 The Jenny Haniver, as seen in the film

The interior of the Jenny Haniver