Leila George
Katherine Valentine is the daughter of Thaddeus Valentine, the Head Historian of London, and the paternal half-sister of Hester Shaw.

In the 2018 adaptation of book one, she is portrayed by English actress Leila George.

Katherine was born on Puerto Angeles, a raft city. When she was five, her mother died and she was sent to live with her father, Thaddeus. After a trip to the Ice Wastes, Thaddeus gave her Dog as a present.

Katherine accompanied her father, as well as Tom Natsworthy, to oversee the digestion of Salthook. She observed the assassination attempt on her father's life by Hester Shaw, but believed that the would-be killer, as well as Tom, had died after falling out of the city.

After overhearing a conversation between Thaddeus and Magnus Crome, Katherine decided to investigate MEDUSA, as well as the disfigured assassin. Learning nothing from an interview with Crome, she visited the Deep Gut Prison to contact Bevis Pod, an assistant Engineer who had witnessed the murder attempt. She managed to meet Bevis, but he denied any detailed knowledge of the incident. She also observed the brutal treatment of the convicts, and her faith in London's system was deeply shaken.

Later, Katherine received a mysterious letter from "a friend". At first doubtful, she then went down to Tier Five to see who it was: Bevis Pod. Bevis informed her that Hester Shaw did not drag Tom over with her, as Katherine was told by her father. Realising that MEDUSA was the source of her father's troubles, Katherine convinced Bevis to sneak her into a Guild meeting, where she learned of MEDUSA's origin. With the help of Chudleigh Pomeroy, she and Bevis then fled to the Historian's Guild before they could be recognised as intruders.

After MEDUSA destroyed Panzerstadt-Bayreuth, Katherine continued her investigation with Bevis, and they began to fall in love. Eventually, Katherine discovered that her father murdered Hester's parents, Pandora and David Shaw, in order to gain MEDUSA. She confronted him after his return from Shan Guo, disowned him, then resolved to destroy the weapon with the aid of Bevis. However, the pair were betrayed by Herbert Melliphant. A battle ensued between the Historians and the Engineers, and Katherine was able to move to St Paul's Cathedral to execute the plan.

Katherine observed Hester's capture, saving the latter's life by jumping in front of her while Valentine attempted to stab her. Landing on the keyboard of MEDUSA, Katherine inadvertently fed it an incorrect password, causing it reject its given coordinates and malfunction. She spent her last moments in her father's arms, and her body was destroyed in the explosion of MEDUSA along with Valentine and London.

Katherine is portrayed by Leila George in the Mortal Engines. Instead of dying in the finale (like her book counterpart), she survives London's destruction and leads London to the safety of Shan Guo.

Katherine is first seen in the London Museum looking for information on the Sixty Minute War. After Tom is found by Chudleigh, he takes her to a hidden room, where he shows her footage from the War on a device he built. When they exit the room, Melliphant tells Tom that he must go to the Gut to hunt relics, and Katherine decides to assist him.

As they walk towards the Gut, Tom and Katherine run into Bevis, who is heading to the waste chute for maintenance. 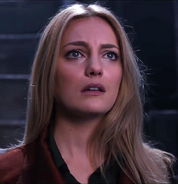