The Orbital Defence Initiative (abbreviated ODIN) is an orbital satellite weapon; a potent relic of the Sixty Minute War and a major feature of the third and fourth books in the series, Infernal Devices and A Darkling Plain.

ODIN was built as part of the arms race between the American Empire and Greater China and may have been fired during the Sixty Minute War. It and MEDUSA are the only superweapons known to have survived the war in a functional state - although there are several references to other orbital superweapons (Diamond Bat, Jinju 14, and The Nine Sisters for example) they are hinted to have broken up over time and fallen from the sky. ODIN is most likely an American Empire satellite as the code for controlling the satellite was acquired from an American submarine.

The Tin Book of Anchorage, copied from a military document recovered by the refugees of the original Anchorage from a submarine, was a codebook for controlling ODIN. Wren Natsworthy, the daughter of Tom and Hester Natsworthy, helped the Lost Boys stole it. Brighton would gain possession of the Tin Book.

The Stalker Fang came to possess the book, and then memorised its contents and then left it to be destroyed on Cloud 9 when she was attacked and destroyed by Shrike. The Tin Book was then burnt into ashes. When Fang was rebuilt by Fishcake, her Stalker alter-ego traveled towards Batmunkh Gompa to acquire technology with which to build a transmitter to contact the orbital weapon.[1]

Firing for the last time

When ODIN was reactivated and fired on the Stalker Fang's orders a number of cities both mobile and static are destroyed; confusion ensued on the part of the Green Storm and Tractionists. Both sides attempted to find the transmitter, leading to the Green Storm assault on London, but it is Tom, Hester and Nimrod Pennyroyal who found Fang.

As the Stalker Fang prepared to target all the volcanoes on the Earth and so destroy humanity, a final confrontation brings Anna to the fore once more and she orders ODIN to turn its weapon upon itself, destroying it. The transmitter itself was destroyed when Pennyroyal killed the Stalker. The destruction was witnessed by Hester and Tom as the latter died, prompting the former to commit suicide in order to join him.[2]

ODIN is armed with a directed-energy weapon which apparently converts the energy produced from some sort of onboard reactor into a coherent beam of incinerating energy which is visible from long distances. This has the power to destroy cities (both traction and static) and can also provoke volcanic eruptions. Being mounted on an orbital platform the weapon has a longer reach than the ground-based MEDUSA.

Firing the weapon seems to interfere with the mechanical minds of Stalkers; Even Shrike and the Stalker Fang with their advanced Old Tech brains went into a fit-like state, while lesser Stalkers just lose power or explode.

As well as its immensely powerful weaponry, ODIN appears to show signs of autonomous cognitive capability. When it is reactivated, it queries its new position and briefly searches for its old masters, noting the vast difference in geography since its last awakening. This seems to suggests that by the time of the Sixty Minute War the American Empire had developed self-aware artificial intelligences.

ODIN's sensors can zoom in with sufficient resolution to view an individual's face on the Earth, an impressive feat even though the picture is low in quality. It can change its orbit when directed to target all over the globe. 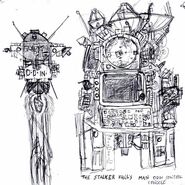 To the left: ODIN in orbit. To the right: ODIN's control device. A fan-made pic from Philip Reeve's blog 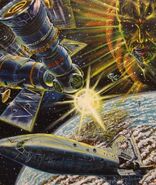 The first-person shooter games Call of Duty: Ghosts and Call of Duty: Infinite Warfare also features an orbital weapon, with the same name and abbreviation, which also destroys multiple cities as a central plot point of the former. It's unknown if this is just a coincidence or if the game's development team were influenced by the books.