The Stalkers, or Jaegers, are a type of combatant mentioned and seen in Philip Reeve's Mortal Engines, Predator's Gold, Infernal Devices, and A Darkling Plain. They are also known as the Resurrected Men. The Stalkers were built by the Nomadic Empires that battled each other across the volcano maze of what was once Europe long before the Traction Era. They are seven feet tall, armoured from head to toe, have glowing green eyes and are also armed with sharp extendable claws on each hand. They built these Stalkers by dragging dead bodies from the battlefields and bringing them back to a sort of life by wiring strange 'Old Tech' machines into their nervous systems and made deadly warriors by removing unnecessary internal organs, grafting on a metal carapace and implanting weapons, typically finger-glaives. A known unit of Stalkers was the Lazarus Brigade.

Once a dead person is resurrected as a Stalker, they have no feelings and emotions and they will not have any memory of who they were before they died, and if they do they are hazy and only in glimpses (although if killed and re-resurrected, some memories may be returned but it often takes several deaths to do this. Known examples are the Stalkers Fang and Shrike (called "Grike" in North American versions).

The only Stalkers known to have been resurrected more than once (the Stalker Fang may be a special case, because her stalker brain was salvaged from a "Remembering Machine"). However, in the case of Stalker Shrike, as he was "Dying" for the first time since being resurrected, he was finally able to remember his life before resurrection. This appears to be due to the circuitry in their brains, which is designed to suppress previous memories. The Nomadic empires were long forgotten but their deadly Stalkers were not. In Mortal Engines, one of the minor characters is a Stalker named Shrike and the London Guild of Engineers build new Stalkers from dead prison convicts at their experimental prison in the Deep Gut, though these Stalkers are not as refined as Shrike due to less sophisticated stalker-brains, the devices used in the brains and nerves of Stalkers.

Stalkers seem to be all but invulnerable to small arms fire and hand-held weaponry. They do not feel any pain, and kill all those who stand in their way. It is unlikely that swords, knives, nor daggers could harm them at all, but no-one has ever got close enough or survived long enough to find out. However, Tom Natsworthy (a fundamental character in the books in which the stalkers feature) does manage to 'kill' Shrike with a sword near the end of the first book; this was mainly due to luck as Shrike was distracted at the time and had previously been run over by two Traction suburbs and shot with a cannon, but it proves stalkers are not totally 'invulnerable'. Shrike also finds Popjoy's stalkers are weakest at the neck.

In Predator's Gold, a London Engineer named Dr Popjoy, who survived the explosion, is captured by the Green Storm which makes him build new Stalkers. These Stalkers are different from the original because they come in many different forms such as spider-like-machines armed with a machine gun in its belly, whale stalkers designed to shoot missiles against Raft Cities and bird Stalkers called Raptors used to aid Green Storm airship fighters. By the fourth book stalkers have also been modelled into trains, and Popjoy also had a number of pet stalkers built from such creatures as cats and insects. However, the most common were the humanoid stalkers which would be used as footsoldiers by the Storm. Their faces were concealed by blank, steel faceplates with narrow slits for eyes and their armour was marked with the green lightning-bolt symbol of the Green Storm. However, unlike their predecessors, they were mindless and had to be recharged after a while.

Interestingly, the same engineer was able to "resurrect" Anna Fang so that she could lead the Green Storm. Unfortunately the 'new' Anna did not remember much of her past life at all, and had to be kept in a secure underground room with all entrances to it electrified. However, the Stalker escaped during an attack by the Lost Boys. The Stalker then took control of the Green Storm base. Now known as the Stalker Fang, she led the Green Storm military forces during an attack on the League's capital Tienjing which resulted in the overthrowing of the High Council.

Stalkers would be used by the Green Storm during its war against the Traction Cities. A special branch of the military called the Resurrection Corps was also founded. They specialised in resurrecting dead bodies dragged from the battlefield into Stalkers. In Infernal Devices, a Resurrection Corps Surgeon-Mechanic named Dr. Oenone Zero also managed to locate and resurrect Shrike. However, she programmed Shrike with secret programming so that he could be forced to kill Fang upon hearing a certain phrase.

In the last book of the Traction Cities Quartet, it is mentioned that the first Stalkers were "remembering machines". There, Shrike, whose goal was originally to make Hester Shaw into a stalker, decided to bury both Hester and Tom as well as serve as a remembering machine hundreds and thousands of years later. In Scriveners Moon, set in the mid Traction Era when London was first mobilising, Fever Crumb discovers an Ancient laboratory containing some of these remembering machines. They tell her that the "Stalker-brains" were an invention of the Ancients, designed as a brain implant which could download and store a person's memories and consciousness. Seemingly, this was originally for the purpose of preserving a person's mind until after the 60 Minute War, whereafter the implants could be placed into host bodies, reanimate the dead brain and nervous system, and bring the original mind back to life. Fever's grandfather experimented with placing an implant with his own memories into a living host, but this had limited success as the living host's mind seemed to clash with that of the implant.

Sometime after the 60 Minute War, the warring Nomad Empires adapted this technology. Rather than containing the complex memories and consciousness of a past life, their implants contained crude, basic, soldiers minds, programmed for following orders and killing. Combined with artificial organs to generate energy and preserve the dead organic tissue, they created an army of ruthless, unfeeling, and virtually immortal resurrected soldiers known as Stalkers.

By the time of the Fever Crumb trilogy, there were only a few dozen Stalkers left and the knowledge of how to build Stalkers brains had been lost - the creation of new Stalkers, like Shrike, relied on left-over Stalker-brains from the Nomad wars. The last Stalkers either broke down or were destroyed over the following centuries, with the exception of Shrike. It was only from extensive study of him by the Engineers of London that the art of making Stalker-brains was rediscovered, albeit never to the complexity of the Ancients. 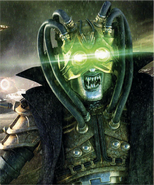 An image of Shrike on the Predator's Cities new cover 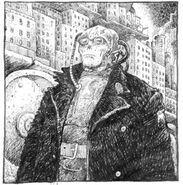 Shrike in the Traction Codex

Another image of Shrike 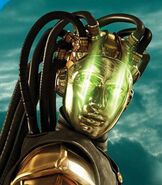 Anna Fang as a Stalker